A couple cycling in Vietnam

It’s the question everyone keeps asking us: “Why in the world did you guys, two totally inexperienced cyclers, even want to bike the length of Vietnam?” It’s a valid question, and like most of the big challenges we throw ourselves into, the answer is perfectly straightforward. We decided to cycle Vietnam because it sounded like fun. That’s ultimately it. Our only prior cycling experience was a three-day jaunt down Taiwan’s East Coast, and obviously that was child’s play in comparison to six weeks of adventuring through Vietnam.

But we did it. We opened ourselves up to new possibilities and embraced the challenge—both physically and mentally—and somehow, beyond any reasonable expectations, we succeeded. We cycled over 1,000 miles from Hanoi to Ho Chi Minh City, and though it proved to be one of the most challenging endeavors of our lives, we wouldn’t have wanted to experience Vietnam any other way. 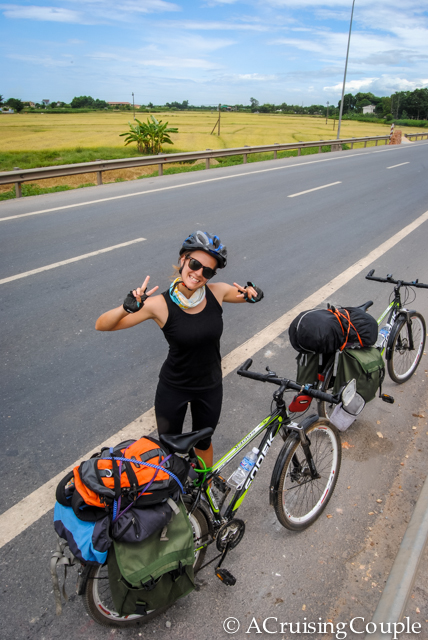 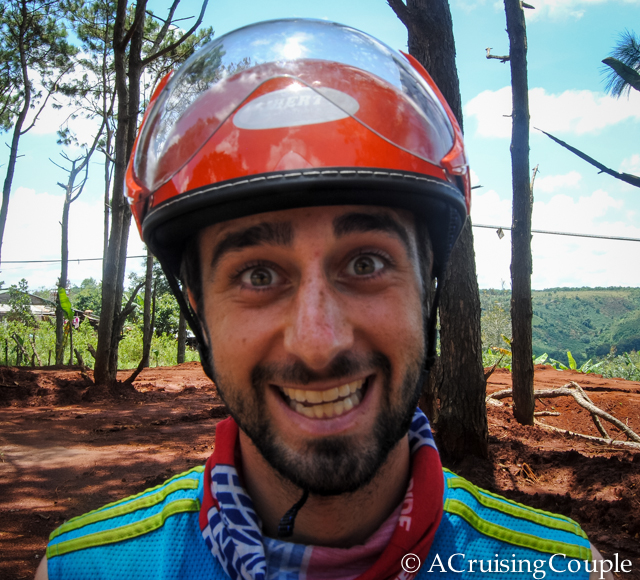 If we can tour the country of Vietnam by bicycle, you can too. It takes a bit of physical strength and a whole lot of determination, but that’s about it. Of course, you might need some bikes and accessories and want to know where to go and how to do it. Don’t worry—we’ve got you covered below. And really, those are all just added bonuses anyway. If you’re interested in seeing the world from the biker’s lane, then this is the guide for you. It’s designed specifically for Vietnam, but a lot of the tips are applicable for cycle touring anywhere!  Good luck and happy pedaling!

In Vietnam, almost everyone has a bike. Children bike to and from school in herds of 20 or more while old women use their bikes to balance heaps of market goods. Because of Vietnam’s biking culture, it’s easy to find bicycles for sale in major cities and rural villages alike. Of course, not all these bikes are geared towards long-distance cycling and that’s where a bit of bike buying knowledge comes in handy. We bought our bicycles from one of the many bike shops lining Ba Trieu Street in Hanoi. They were new and held up fairly well during the tour. The bikes on this street are cheaper, and therefore require a bit of cleverness to get a good deal. Another option is to visit the Hanoi Bicycle Collective. This shop is owned by a super knowledgeable biking expat who sells mostly high-end Japanese bikes. You’ll pay much more but be awarded with confidence in your purchase. 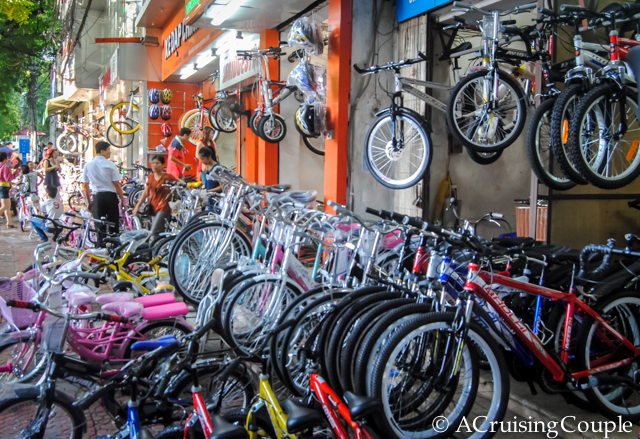 Our budgets were pretty tight, so cheap bike street it was. Like I already noted, we only had minor problems with our bikes, all of which were easily fixed in a few minutes (flat tires, loose brakes, etc). We paid a total of $500 for two bikes and all accessories. That was less than the price of one bike from the collective, so we were quite satisfied. Remember, wherever you purchase your bike, bargain on the price!

1. Vietnam’s roads are just horrible. You’ll want a hybrid between a road bike and mountain bike if you are going to stand a chance against the potholes and mud. We were very grateful for our front suspension and thick tires.

2. Test the gears. Make sure they go all the way up and all the way back down again without any problems. And yes. A bike without gears is out of the question unless you have thighs of steel.

3. Pinch the tire spokes to make certain they are tight. While you’re down there, check the tread on the tires to be sure they aren’t old tires on a new bike.

5. Buy your bike a few days before your trip begins! Ride it around the city, get a good feel for it, and make sure no problems develop. If you notice something iffy, don’t be shy to return it to the store for complementary fix-ups.

There were a few cycling accessories we absolutely loved, a handful of things we didn’t use at all, and of course a sprinkling of items we wish we would have had. Here’s what we would take along next time:

To store all your things. Be sure to grab some extra bungee cords to wrap up whatever you’re carrying on the rack.

For cycling within the towns and cities at night.

You don’t want to get halfway only to wake up stranded and bike-less.

All the vehicles honk incessantly. It would have been really nice to make some noise back at them.

Once you see the traffic, you’ll understand why.

The spandex might not be sexy but the cushioning is crucial.

Sweaty hands slipping off the front are just not fun.

We had huge difficulty finding sunscreen when we ran out of our supply. Bring extra with you—Vietnamese don’t use it.

For making small adjustments and just in case.

I’ve saved the most important for last. Vietnam has a very extensive 3G network; we relied heavily on our iPad and Google Maps during our tour. I’m not sure we would have ever found our way out of Hanoi without it!

Other than what’s listed above, don’t pack much. I definitely overdid it (and our shopping spree in Hoi An didn’t help). Think bare essentials: two cycling shirts, lightweight athletic shoes, one pair of flip-flops, two pairs of clothes to change into post-cycling, and a first-aid kit. Toiletries and towels come in most guesthouses or can be purchased in individual packets everywhere in Vietnam.

There are essentially three options for getting from Hanoi to Ho Chi Minh City:

We went with the latter option, primarily because it encompassed everything we wanted to see. Highway One is the easiest option. It’s straightforward, the road conditions are better, and there is a large shoulder for cyclists. The traffic is heaviest on Highway One, but we actually found it to be safer than other areas of Vietnam. Hotels and cities are common along Highway One because of all the traffic it sees. The highway isn’t nearly as beautiful as its inland counterpart, and you won’t hear nearly as many ‘hallos’ from the locals. Still, it’s quick and cuts through many of the main tourist cities like Danang, Hue, Hoi An, and Nha Trang.

The Ho Chi Minh Highway is stunning. Nearly all the photos that were included in our Tour de Vietnam segment were taken from this route. Expect horrific road conditions, increasingly poor traffic, and mountains to traverse. There are still plenty of towns along the way, but you’ll have to time your itinerary to strategically arrive at them when you’re ready for a hotel or meal. Not too many foreigners cut through the rural areas around the HCMH—even less do it on a bicycle. You’ll receive lots of smiles, cheering, questioning looks, and excitement from the locals you pass.

Though the Ho Chi Minh Highway was much more difficult, it was also the highlight of our journey. That said, we also wanted to experience a bit of Dong Hoi, Hue, and Hoi An on Highway 1.

Here is a closer look at our route: 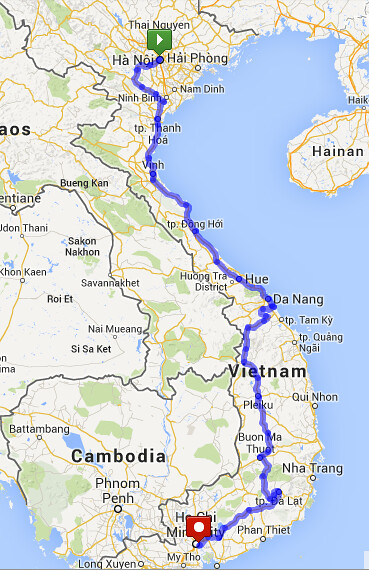 We also found this blogger’s itinerary to be extremely helpful. He details the road conditions for each day and has lots of pictures. However, he’s a cycling beast and we almost always fell short on the few days we tried to match him.

Should you find yourself stuck or unable to cycle farther, trains run down the east coast, buses and vans frequent the entire country, and all transportation will allow you to put your bike on board. It is possible to flag down a bus on the side of the road, but be prepared that the driver will charge you an absurd amount of money. It’s easier to get a more standard deal at a bus or train station.

If a place appeared to have at least a handful of streets on Google Maps, then it almost always had a few hotels and plenty of restaurants to choose from. There was only one time we found ourselves worried about where we would lay our heads, but luckily we had our guardian angels and kind Vietnamese to save the day. There’s no need to carry a tent and we’re not sure how safe we would have felt sleeping on the side of the road anyway. Our cheapest accommodation was $6 a night, while our most expensive was an Oceanside splurge at a four star hotel for $45.

We found Highway One to be a bit more expensive (averaging around $12 a night) while the South was nearly always under $10. *Tip: Nha Nhgi means guesthouse. Often they are less expensive than places that say ‘hotel’ in English but still offer the same amenities. Restaurants and cafes are frequent, provided you don’t mind small, open-air establishments serving just one daily dish.Again, utilize that GPS and plan ahead, especially on some portions of the HCMH, but don’t worry too extensively about not finding necessities.

Luckily we didn’t have to deal with any emergencies ourselves. Should you need assistance, call 113 for police, 115 for ambulance. If your emergency is with your bike, look for a small ‘Honda’ shop. These are motorbike repair stores, but the owners are often very handy with a bike too. They won’t charge for service, only the parts themselves. We frequently would get our tires pumped up, our gears oiled, and our brakes tightened for next to nothing. 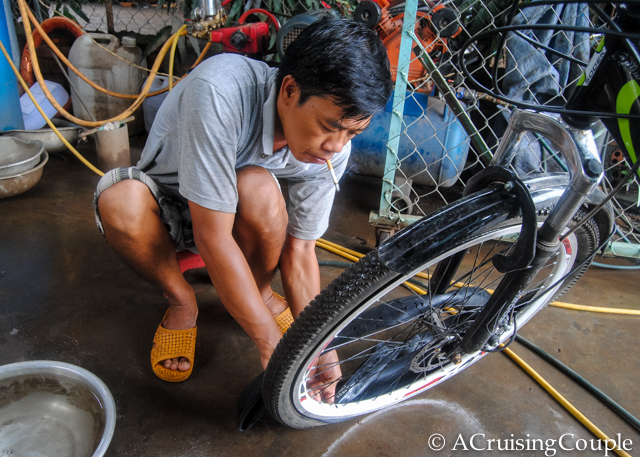 We LOVE the Vietnamese, but there were a few instances we felt uncomfortable. We followed our instincts. If ever we were a little unsure of someone who had stopped to talk to us or was looking a little too closely at our belongings, we said a friendly goodbye and cycled away.  Luckily that was the extent of it. Don’t pull out expensive technology on the side of road; it’s all too easy for someone to grab it and drive off. We also had a wallet picked out of one of our saddlebags while it was with hotel security… Being on a bicycle does make you a bit more vulnerable for the same reasons it allows you to interact more with locals. Just play it smart like you would anywhere.

If you want to cycle but aren’t too keen on tackling it alone, there are numerous cycling companies that will take you on a tour. Often a lot of your journey will be cushioned with bus and van rides, which isn’t necessarily a bad thing. There’s also a support van that follows along and carries your belongings. We met a couple that had completed a one-week cycling tour and only had good things to say about it. However, they are pricy. Our total trip for two people over six weeks (including bikes and some shopping) cost us $3000 USD. You might spend the same amount on a one-week tour with a company. Still, it’s an option worth considering if you’re looking for a streamlined cycling experience.

Cycling Vietnam was certainly one of our most adventurous and memorable travel experiences to date. Thanks for being with us on the journey—we hope we have inspired you to try something new and have your own adventure, whatever that may be!