Vietnam cycling tours   has cancel almost of cycling holiday in Mar and Apr  until next ?look around the world , that would be bad time coming to every one

Pro cycling teams across the globe are scrambling to deal with a growing coronavirus crisis, one that is already putting the pinch on the international racing calendar. The UAE Tour was stopped in its tracks, and three teams remain in quarantine. On Thursday, RCS Sport canceled Strade Bianche, the first major European race to be affected by the fast-moving health emergency.

“Cycling is a uniquely mobile sport,” said Team Ineos principal Dave Brailsford after the team pulled out of racing this week. “We have a duty of care both to our riders and staff, but also to the people living in the areas we race. We do not want to be in a position where our riders become potentially infected or quarantined on race as has already happened.”

The coronavirus scare has reconfirmed cycling’s disjointed business model makes it challenging to confront global challenges in a unified voice. Its hodgepodge collection of races, teams, associations and governing bodies means that decisions are being made individually. Just a week ago, it seemed outrageous to consider that Strade Bianche might be canceled. Now, there is a nationwide ban on large public gatherings in Italy, and there are growing worries that Paris-Nice and the spring classics could be next.

On Wednesday, the UCI decided it’s best for races to make locally based decisions after consultations with regional and national authorities and experts. As that drama is playing out in real time in Abu Dhabi and in Italy, men’s and women’s cycling teams across the globe are contemplating participation in races. Several have suspended part of their racing programs for much of March, including EF Pro Cycling, UAE-Emirates, Astana, Team Ineos, Mitchelton-Scott and Parkhotel-Valkenburg.

Cycling authorities have postponed this month’s Tirreno-Adriatico and Milan-San Remo races because of the coronavirus outbreak. The decision, which includes rescheduling the Tour of Sicily at the start of April, follows the Italian government’s decision to suspend all sporting events that cannot be held in a closed arena until 3 April. 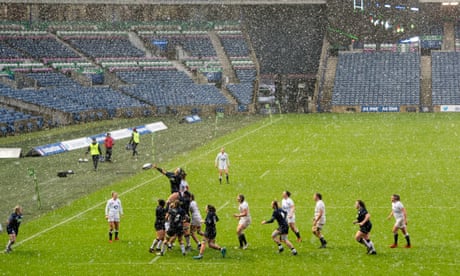 The Tirreno-Adriatico had been due to start on 11 March, with Milan-San Remo on 21 March but organisers are looking for alternative dates later in the year. Teams including CCC, Astana, Ineos and Mitchelton-Scott had already withdrawn from a number of races.

Meanwhle, in golf, next week’s European Tour event in Nairobi and the Asian Tour’s Royal’s Cup 2020 in Thailand have been postponed indefinitely. The event in Nairobi has been called off after the Kenyan government decided to postpone all international meetings and conferences in the country for at least a month.

The European Tour chief executive, Keith Pelley, said: “We understand and totally respect the decision made by the government of Kenya in these difficult times. We are looking into the possibility of rescheduling the tournament at some point later in the season, but that remains simply a possibility right now – we have no definitive plans at this stage.”

The Rugby Football League, meanwhile, has advised clubs “there is presently no rationale to close or cancel sporting events in this country – although clearly this may change as the situation evolves”. It is consulting with the broadcaster Sky about playing behind closed doors should the virus spread.

It has, however, recommended players are encouraged not to take part in handshakes, kiss or hug teammates, swapping in fist-bumps or waves. Selfies are also to be encouraged with fans rather than taking items to sign.

Friday night’s PRO14 fixture between Dragons and the Italian club Benetton will go ahead as planned after the Welsh club received public health assurances from league organisers.

It was also announced on Friday that PSG’s Ligue 1 match at Strasbourg on Saturday afternoon has been postponed because of the coronavirus outbreak. Strasbourg’s Alsace region is one of the worst hit by the outbreak in France, where 613 cases and nine deaths have been reported.