Plus-Size Wheels Vs. Standard Wheels: The Real Scoop on the Future of Mountain Bikes

Plus-size tires, bikes, and components designed to accommodate them, are taking center stage in the latest-and-greatest MTB trend for 2015. However, based on Facebook comments left on a plus-size news blurb a few days ago, perhaps less than half of the commenters actually realized that by “27.5+,” we mean something totally different than “27.5.” So to begin, here’s what 27.5+ really is. 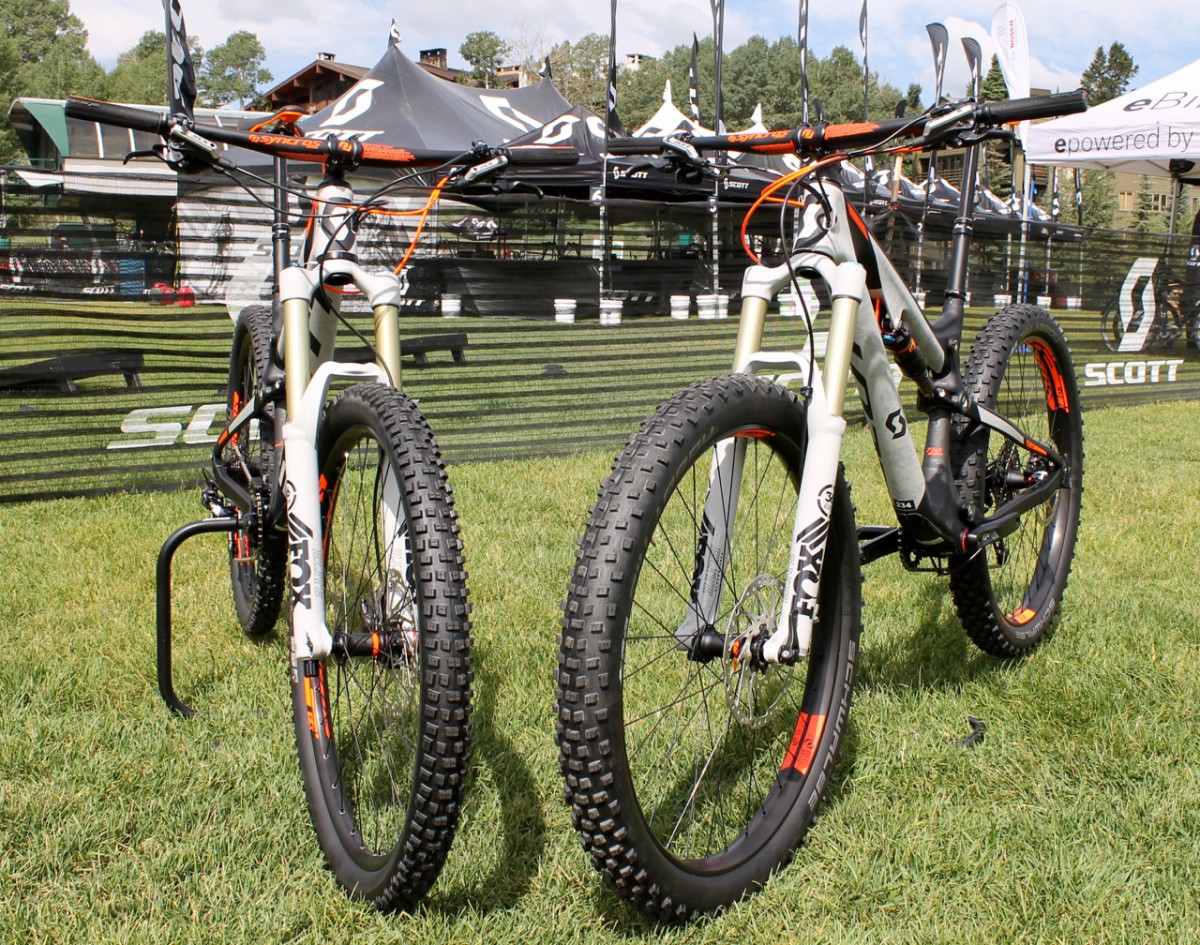 Based on those Facebook comments mentioned above, there seems to be much confusion about what exactly 27.5+ is. In the simplest of terms, 27.5+ is a new wheel/tire size. The plus-sized tires are about 2.8-3” wide, and they also stand much taller than a standard 27.5 tire. Consequently, the diameter of the wheel+tire combo is actually almost exactly the same as a standard 29er wheel+tire. However, thanks to the wider rim and significantly increased tire volume, the handling characteristics are very different. 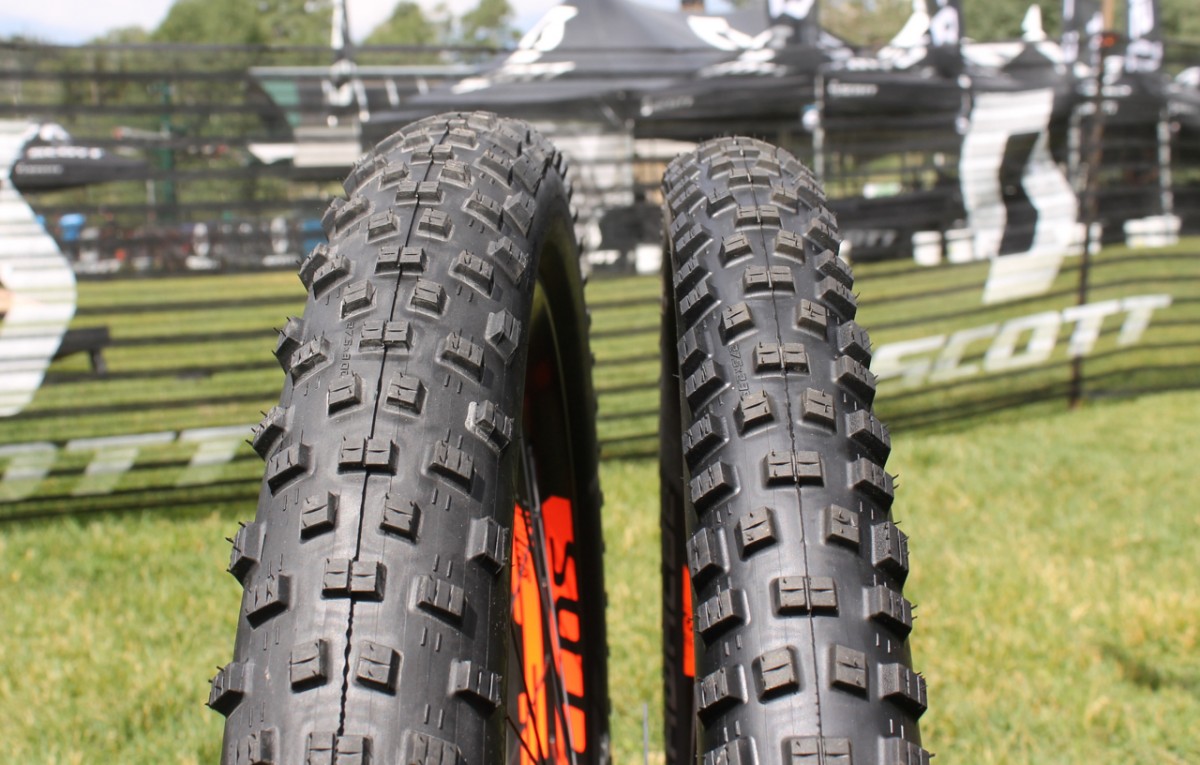 In order to make this new tire size viable, several things had to happen. First and foremost, the rim width needed to be wider to provide a more stable base for the tire, so it doesn’t fold over during hard cornering. There are currently several different rim widths floating around that all have their proponents, but Scott/Syncros are currently touting a 40mm internal width as the sweet spot.

Second, in order to accommodate a truly-aggressive plus-sized tire, a new fork is required, along with a new front hub width. Also, a new rear end width is ideal to provide plenty of tire clearance—which is why SRAM has rolled out their Boost 148 component standard. 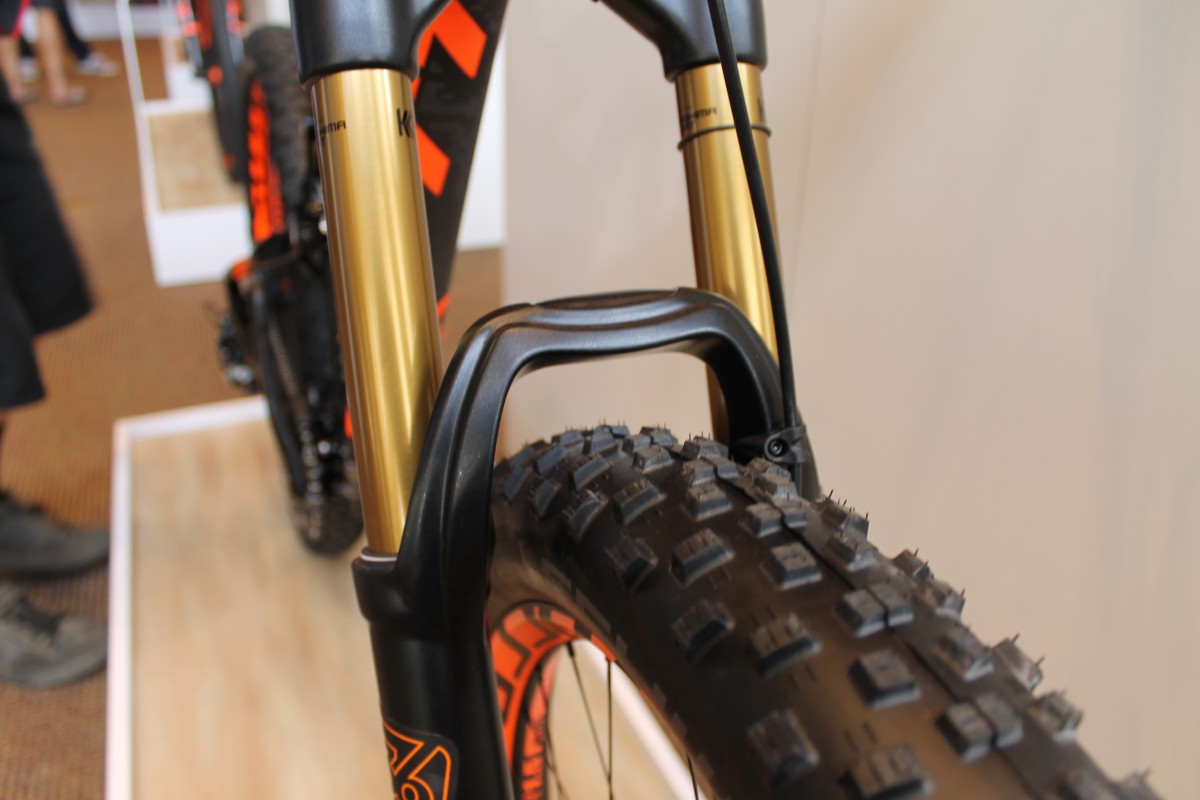 All of these factors add up to create an all-new bike… but how exactly does it compare to a standard 27.5 mountain bike? That question has been difficult to answer, as most bikes with plus-sized tires have either been conversions, or they haven’t had equivalent standard-sized tire models—until now.

In order to make this article possible, I tested the Scott Genius LT back-to-back with the Scott Genius LT Plus. The bikes are as close to identical as possible, although there are a few minor differences. The standard LT sports 170mm of suspension, while the LT Plus is 10mm less at 160mm. 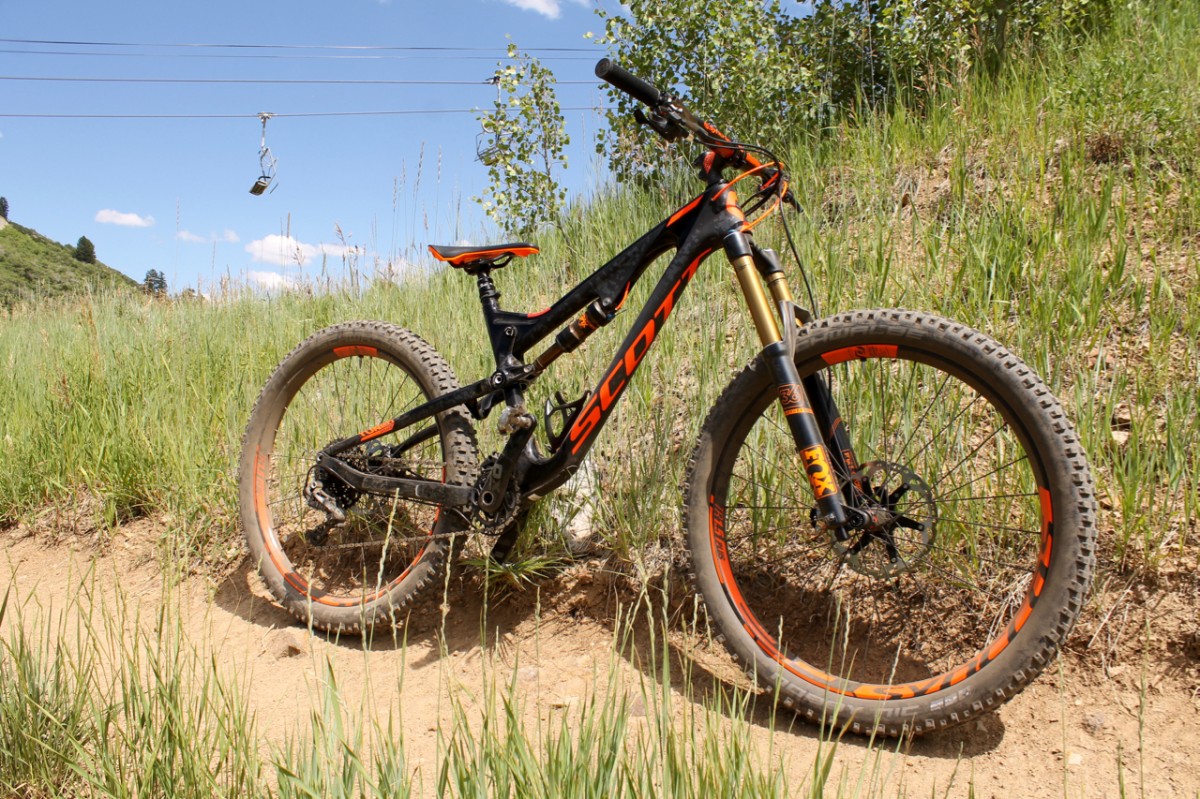 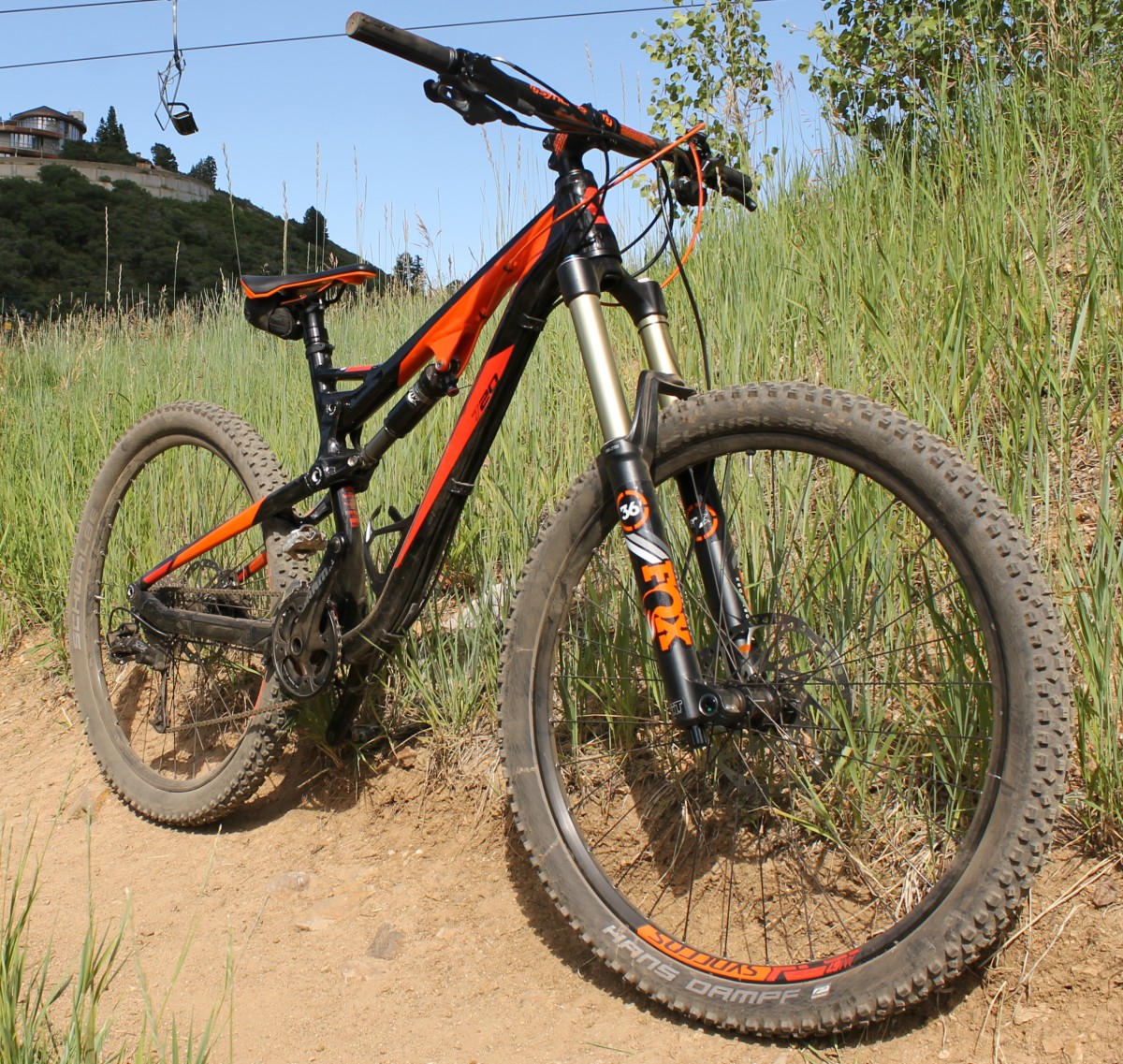 Also, there are some weight penalties to riding Plus: on the high-end Genius LT Plus Tuned, the Plus wheels and tires currently add 250g to the wheelset weight. Also, in the Tuned model, the rear triangle adds an additional 250g, as it’s currently made of aluminum as compared to carbon in the standard Tuned model. Of course, if you were to compare the LT to the LT Plus in the lower all-alloy models, the rear end weight difference would be negligible.

While for the moment I’ll refrain from relating Scott’s opinion on which is better, they do have some key statistics that are science-driven. Using their current stock setup, the LT Plus, when compared to the standard LT, provides 21% more contact patch, 8% better snake bite resistance (due to increased tire volume), but it does create 5 watts more rolling resistance.

Finally, the ideal tire pressure is roughly 13-15psi, adjusted up or down based on rider weight.

(Side note: in the press release we reported on back in June, Scott had announced that the LT Plus was only going to be available in Europe. I found that to be an odd choice, and the Scott folks in the US office did, too. The US Scott Bikes employees all said that the LT model is the one they’d personally buy, so Scott has decided to bring the LT to the US market this year, as soon as bikes are available.)

My testing grounds for these two bikes was the bike park at Deer Valley Resort in Park City. The trails consisted of old school rooty, tight, twisty, rocky, scree-filled gnarfests, along with a few new school flow trails complete with berms, tabletops, and mach-10 speed. Granted, a longer-term test over the course of a few weeks on terrain that I’m more familiar with would have been more ideal than one afternoon of riding, but being able to get on both bikes on the same trails in the same day led to a great comparison opportunity.

Perhaps what surprised me most about shredding on the plus-sized bike was how natural it felt. Having ridden full-suspension 4-inch fat bikes in the past, I think I half ways expected the LT Plus to exhibit some of the characteristics of an FS fat bike. Namely, when you get 4″ fat bike tires spinning at a high rate of speed, turning and maneuvering can be difficult as the centrifugal force of the high-mass tire wants to keep moving in a straight line down the trail. 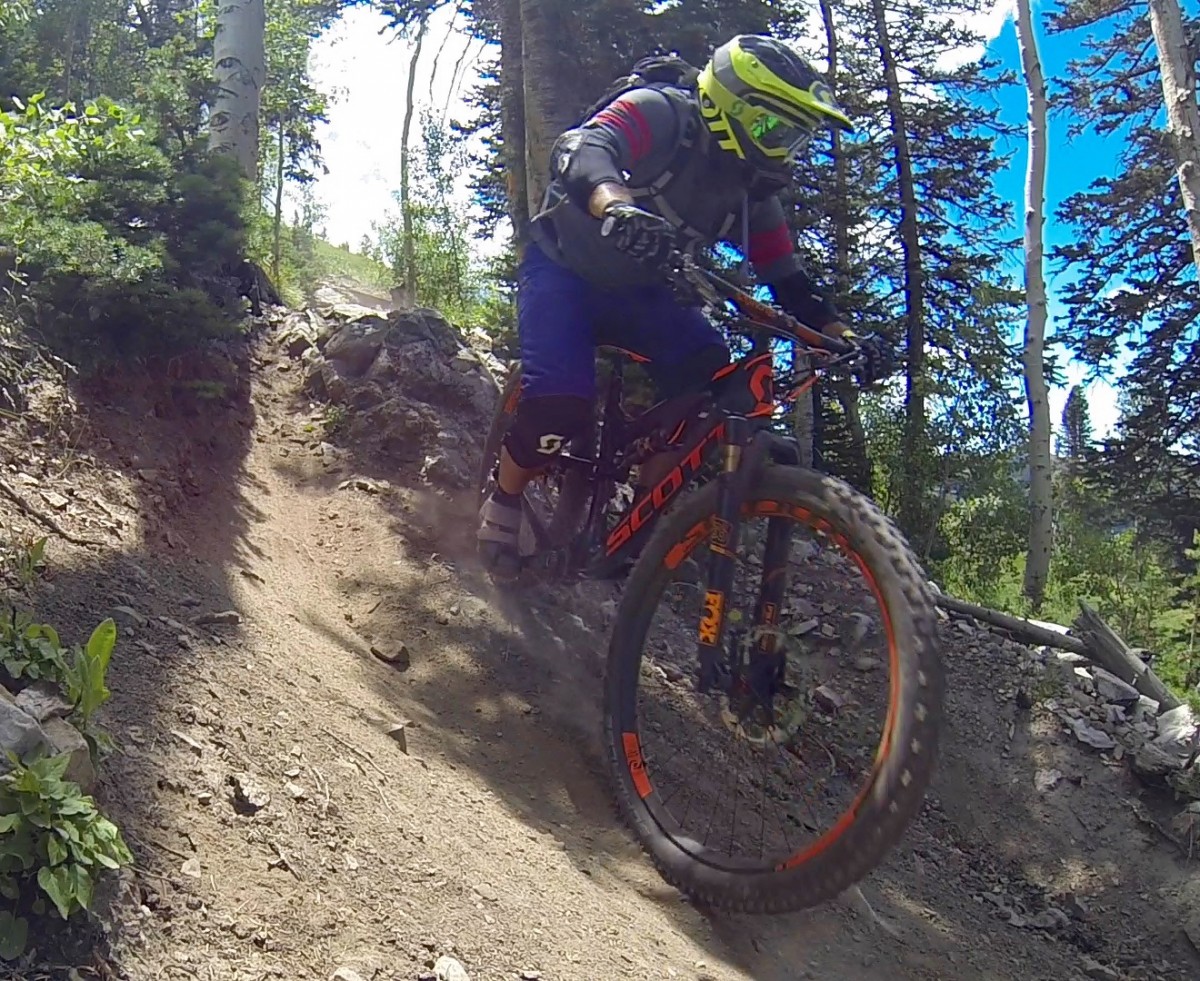 Another downside of full suspension fat bikes are the weight and acceleration penalties. The weight penalty of a plus-sized setup is substantially less than that of an FS fat bike, and while there are some noticeable acceleration delays with the plus tires, they aren’t nearly as defined as on a fat bike. When you do get the plus-size tires moving, the momentum seems to compensate for the slow acceleration.

Scott touts the increased traction of the plus-sized system as a big enough benefit to compensate for the 5 watts of added rolling resistance… and then some. When I hopped on the LT Plus, I expected to have absolute gobs of traction in every situation… but that wasn’t exactly the case. Part of the issue, I believe, is the tires, which I’ll discuss in detail below. Still, while it wasn’t totally fat-bike-esque, the traction from the plus-sized tires is a substantial benefit when compared to standard tires, both climbing and descending.

Perhaps the biggest benefit of the plus-sized tires could be their stability. While traction is signifcantly increased, if you’re like me and you like to power straight up and over every obstacle in your path, the plus-sized wheels provide a stability and a technical prowess in rock gardens and loose conditions that can’t be matched with a standard tire.

Scott claims that the plus-sized tires drift more predictably due to the increased contact patch, and I most definitely concur. When the trails get hairy, the larger treads might break loose and slide (especially due to the blown-out, dusty scree that filled many of the trails at Deer Valley), but they did so very easily and predictably. 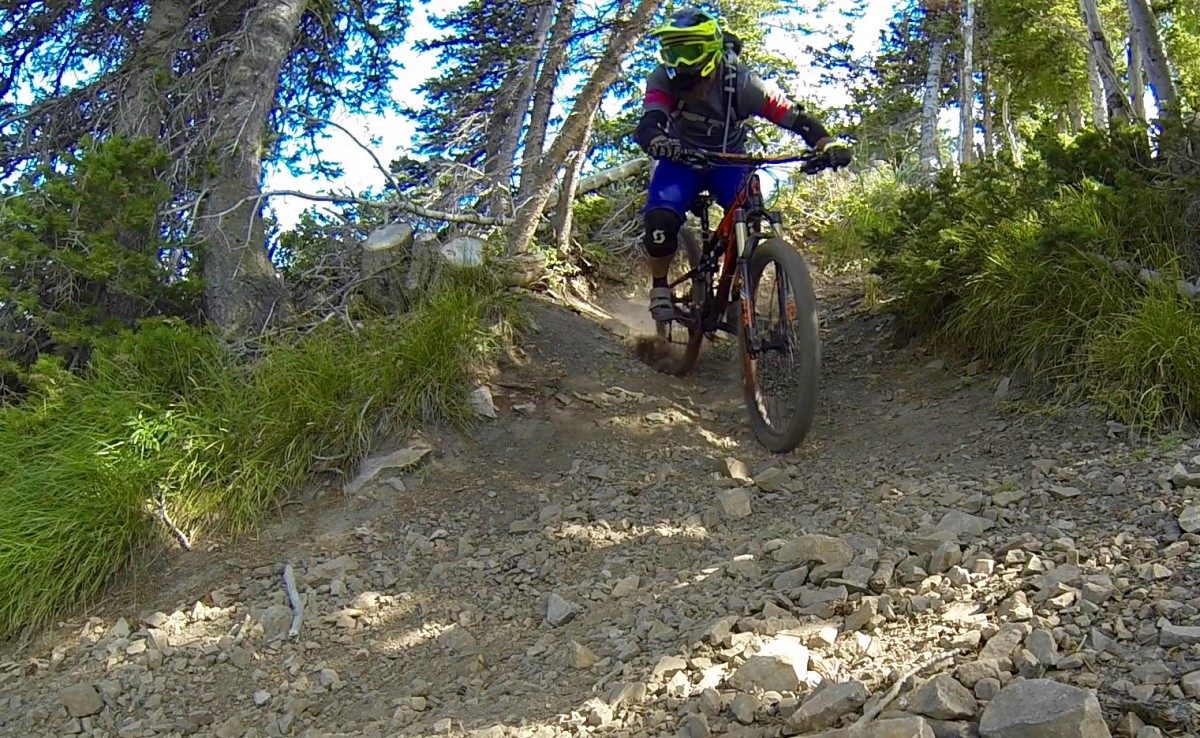 Also, in some of the super-sketchy scree-filled switchbacks, I found that the standard-tired bike had a tendency to get the front wheel turned too sharply to try to make the corner, and then it would dig into the scree and threaten to spill me straight over the top. This isn’t a knock against the standard Genius LT compared to other standard-tired bikes–I think I would have had to fight that tendency on any normal rig on these trails. However, the plus-sized tires were way more forgiving in these situations, making trackstand-like turns an absolute breeze.

I’m personally not the best of jumpers, but amazingly I found the LT Plus to be very confidence-inspiring on the jumps! I found the larger contact patch to offer a much more forgiving landing surface. Instead of feeling like I had to be perfectly on-point with my balance and weight distribution when returning to the ground, the larger tires make launching stupid-far in the air and landing safely an absolute breeze! I did note that the standard LT felt more maneuverable and flickable in the air due to the lower mass of the wheelset, but it wasn’t nearly as confidence-inspiring on landing. Also, while the plus-sized tires felt more stable in the air, they were light enough for me to easily X-up the front end for flying stability.

The main potential downside I see to the stock Scott Genius LT Plus setup is the tires.

To date, the Schwalbe tires spec’ed on the LT Plus are the most aggressively-treaded plus-size tires I’ve seen. However, based on my rides at the resort, I wouldn’t mind if they were even gnarlier, especially on the LT bike. This level of aggressiveness seems much more fitted to the regular Genius Plus, which comes in at 20mm less than the LT (140mm). Spec’ing the same tire on both the 140 and the 160 seems a bit like an act of desperation due to the limited availability of tire options.

I’m pretty vocal about my general distaste for Schwalbe tires, due to poor traction and sidewall failures. But, I thought, I’d give the plus-sized version of the Nobby Nic a shot. After all, they should be able to take some abuse if they’re spec’ed on a long travel bike, right? 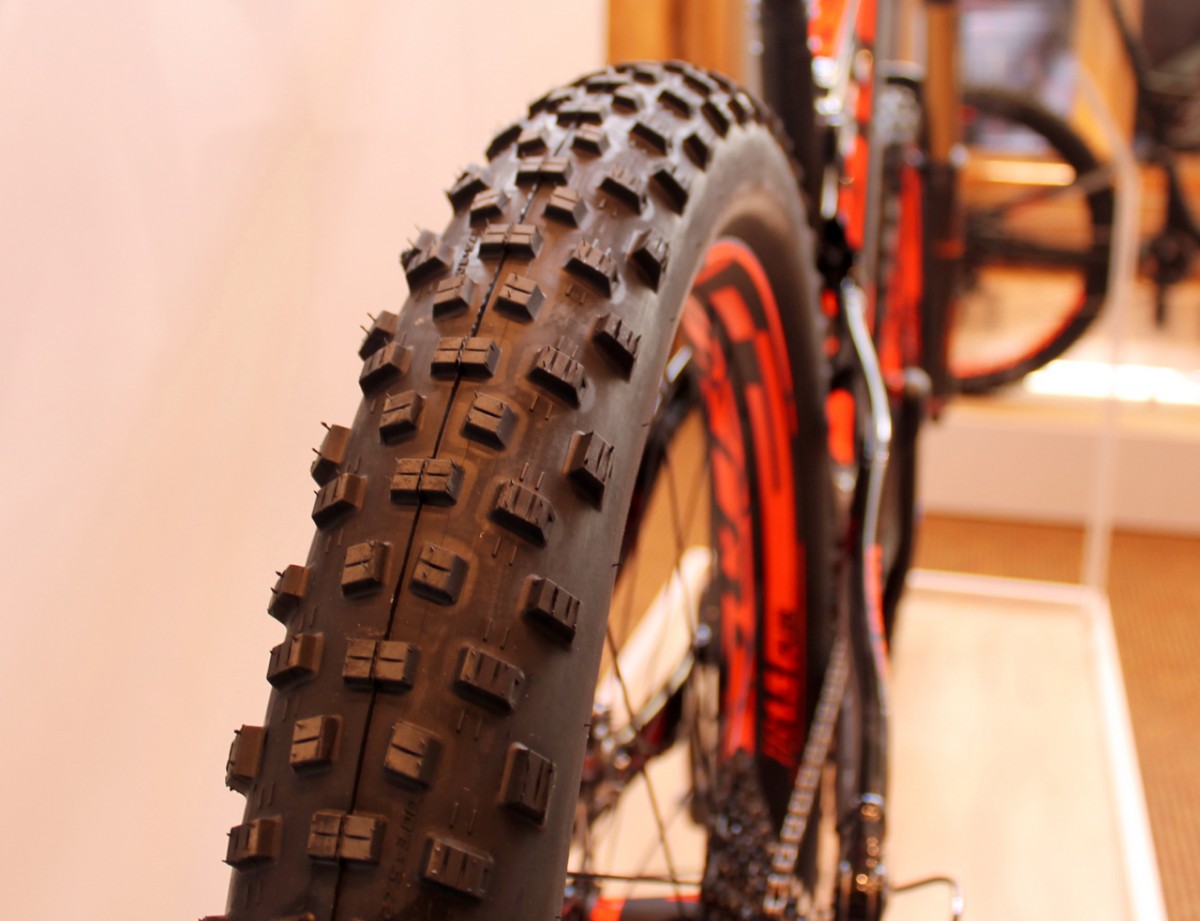 Despite my willingness to try them, I rode gingerly, not charging as hard as I would have on a proven tire. But after a day and a half of riding, I started to get a bit more confident. That is, until I saw two people flat the exact same tire I was riding within a mile of each other. Both people weren’t even riding the LT–they were on the 140mm Genius, and weren’t even riding the gnarly DH trails at the resort. One tire, which I inspected closely, was sliced straight through the casing by a rock—not the sidewall, mind you, but the casing in between the knobs in the center of the tread.

Personally I don’t think sliced sidewalls should ever happen, but a cut casing in the middle of the tread? I’ve never seen such a thing myself. The cut was so bad that this tire, setup tubeless, wouldn’t reseal, so we had to stop and boot the tire, and install a tube to be safe.

Now that we have kick-ass plus-sized bikes on the market that totally rip, it’s time for tires to match that gnarliness. Rumor has it that Maxxis is working on four (yes, 4) plus-sized tires, but no word on the official release date yet. If we can get a plus-size version of the High Roller II? OK, then I’ll be stoked.

As you might be able to tell from my analysis above, I see very little downside to a plus-sized setup, save for the current tire options. But with bikes as good as the Scott Genius Plus and LT Plus entering the market, I’m confident that we’ll see quality tires catch up as this trend gathers steam.

And it will gather steam: while not everyone I spoke with was as massive of a fan of the plus-sized rigs as I was, most people acknowledged the benefits, and some others were big converts, too.

Scott doesn’t think that 27.5+ will replace any current tire/wheel sizes, and that it will just be another great option for riders to choose from. But I’m not so sure: personally, I think the benefits massively outweigh the disadvantages. Ultimately, Scott thinks there are great benefits as well: not only do the big tires make riding a mountain bike easier for beginner riders, but one of Scott’s top enduro pros managed to shave 5 seconds off of his previous PR of 1:33 on his enduro test track.

If that’s not a testament to the plus-sized tires’ ability to enhance the riding of everyone across the MTB spectrum, I don’t know what is. from cycling vietnam asia